Living Cells Technology have announced the beginning of phase II trials of their product for helping Type I diabetics (they call it DIABECELL).  The idea behind the technology is to inject cells (called islet cells – normally present in the pancreas) that can sense glucose levels and release insulin.  LCT has managed to isolate these cells from pigs and encapsulate them in a way that the body’s immune system will not react to them – no anti-rejection drugs necessary.  Being xeno-transplant it has gone through quite a process even to get to the stage of Phase I trials.

This is pretty cool and I sure hope it all works out.  A Phase I/IIa (safety trials and first stage efficacy trial aimed to find an optimal dose) has been conducted at Middlemore hospital in New Zealand and another is underway in Argentina.  A press release in September announced the success of the Middlemore trial:

The New Zealand dose-finding trial was led by Dr John Baker at Middlemore Hospital in Auckland and saw 14 patients treated with a single implant of DIABECELL at doses of 5,000, 10,000, 15,000 and 20,000 IEQ/kg (islet equivalents per kilogram of body weight). The trial demonstrated that DIABECELL is a safe and effective treatment which results in:

Note – HbA1c is just a form of haemoglobin (from the blood) proportional to the blood plasma glucose concentration.

Positive preliminary results from the 9 person Argentina based Phase I/IIb trial were announced.  The difference from the NZ trial is that two doses were given 12 weeks apart.  Followup has not been complete.

While this is all good news, I see no indication that the research has been peer reviewed (nothing in the Press release and I looked on PubMed as well).

The announcement this week is of a phase IIb trial of 20 patients with a dose of 10 IEQ/kg.  The announcement mentioned the trial will be in Argentina with 20 patients.  This is a little different from a September press release which mentioned 15 patients. The hope to metamorphosise the Phase IIb trial into a Phase III trial with an additional 10 patients from NZ.  A Phase III trial is to confirm effectiveness and monitor side effects – it is intended as the final step before regulatory approval.

In the press release the CEO announced.

“We remain on track to meet our goal of completing clinical trials of DIABECELL by 2015 and having a product commercially available by 2016.”

When I read this I thought “gulp – that is pretty positive given trials have yet to be completed.”  I gulped twice when I realized the trials to date have yet to be peer reviewed (although some results are public).  My third “gulp” is that these trials are all in small numbers – especially the planned Phase III trial.  That is not to say that I have any suspicions about the results or the technology, merely I worry about the juxtaposition of “completing clinical trials” and “commercially available” without the explicit interim statement of “and if the product is shown to be safe and effective.”

I published yesterday about my modeling showing Ricky Ponting’s last innings helps predicts the chance of Australia winning.  Today I came across the New York Times “538” blog which uses a prediction model to predict Obama currently has a 91% chance of winning the Presidential Elections.  The reason it is so different from the polls which just report the percentage of people who say they will vote for one or other candidate is because in the US electoral system is all about winning the electoral college votes State by State. The “Chance of winning” model is put together by a bloke (Nate Silver) who rose to fame with his models to predict athlete’s performance.  His predictions use polling data, plus a regression analysis, projections and multiple simulations (see here).  Fascinating.

“Only as good as your last match” goes the cliché.  This is true for Ricky Ponting and here is why. I recently published an article1 (Open Access :)) on some new techniques being used in medical research which determine if making an additional measurement improves what we call “risk stratification.”  In other words – does measuring substance X help us to rule in or rule out if someone had a disease or not.  I got a bit board with talking about “biomarkers” and medical stuff, so when it came to presenting this at the Australian New Zealand Society of Nephrology’s annual conference I looked to answer the very important question: “Does Ricky Ponting’s last inning’s matter?”, or in Australian cricket jargon “Ponting, humph, he’s only as good as his last innings, mate.”

So, when the shrimp hit the barbie, the beers are in the esky, and your mate sends down a flipper you can smack him over the fence for you now know that when Ricky Ponting scored well in his last innings, Australia are more likely to win. 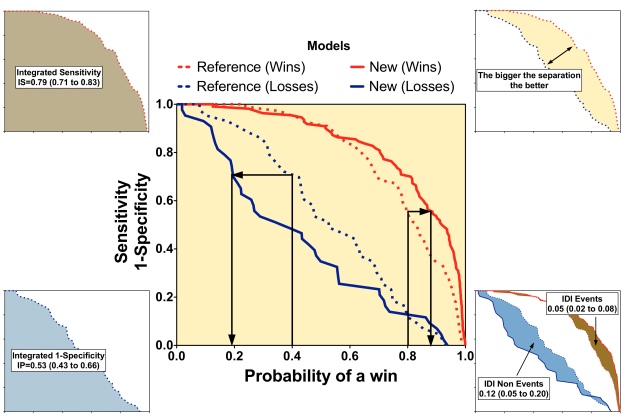 The middle bit is the Risk Assessment Plot. The dotted lines tell us about the reference model. The solid lines tell us about the reference model + Ricky Ponting. The further apart the red and blue lines are the better. The red lines are derived from when Australia won, the blue lines from when the lost. If you follow the black lines with arrows you can see that by adding in Rick Ponting’s last innings the model the predicted probability (risk) of a win increases when Australia went on to win (a perfect model would have all these predictions equal to 1). Similarly the predicted probability of a loss gets smaller when Australia did lose (ideally all these predictions would equal 0).

Like Loading...
"This may not seem very important, I know. But it is! So I'm bothering telling you so." Dr Suess, Sleep book, 1953